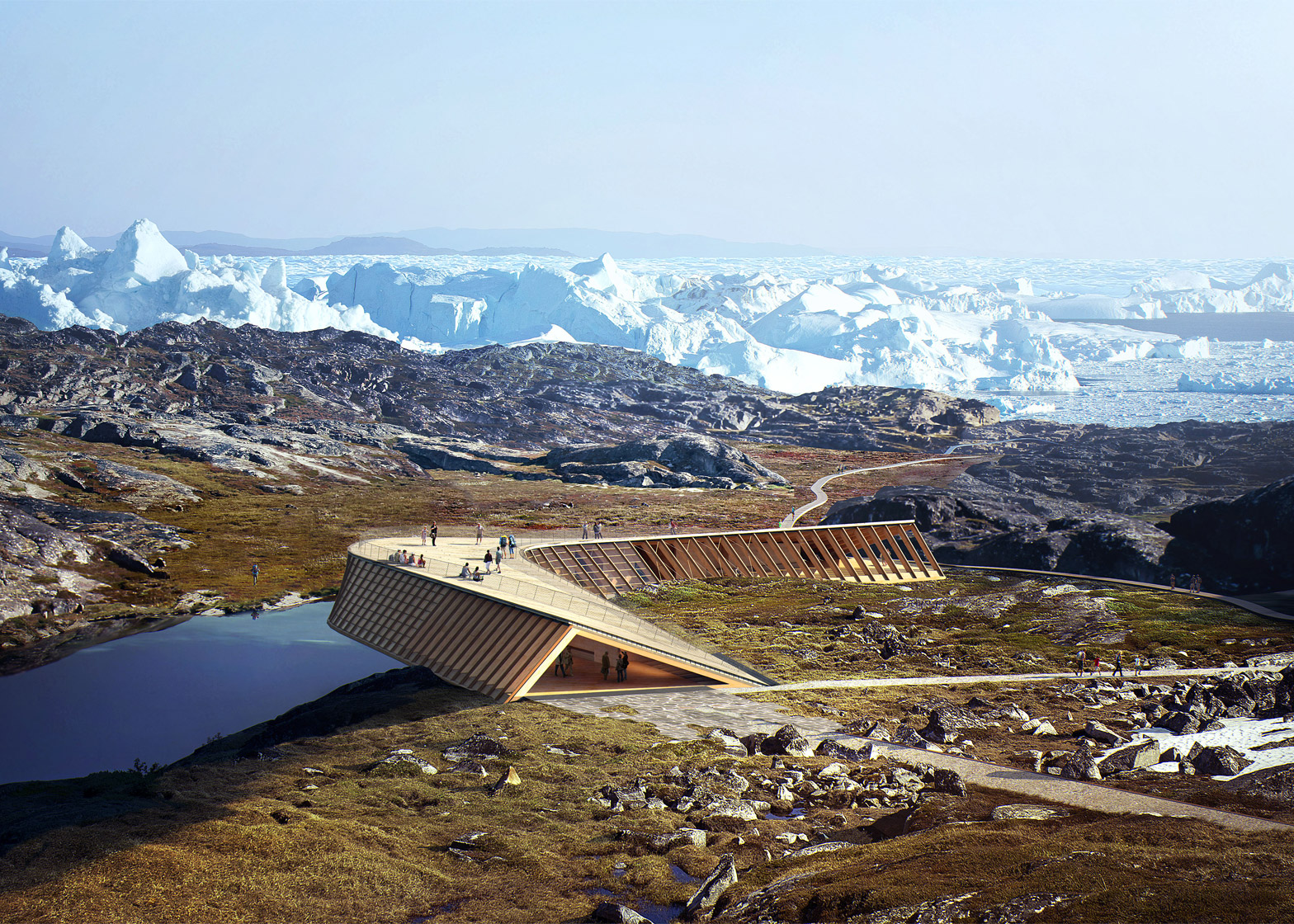 Danish architect, Dorte Mandrup, whose eponymous practice launched in 1999, recently visited London to speak at the RIBA + VitrA Talks series. My colleague Holly got me a ticket as a Secret Santa gift, and although not knowing anything about Dorte or her practice before, I left gaining a newfound appreciation towards Nordic architecture.

Dorte’s talk focussed on the practice’s landscape projects, three of which I discuss below:

Situated 250km north of the Arctic Circle, the settlement of Illusisat is home to the Illusisat Icefjord, a UNESCO World Heritage Site. In this cold and hostile climate that experiences harsh winds and thick snow, scientists and tourists come to witness the effects of climate change – especially the retreating icebergs.

The shape of the Icefjord Centre, according to Dorte, is not just about providing a viewpoint for the icebergs in the exhibition space, but to also create a gateway between the ‘cultivated’ town and nature in its purest form. How visitors use the building will inform that desire. The aerodynamic, boomerang shape adopted will minimise snow build-up from the facade of the building. This has been trialled through tests conducted in a wind tunnel using potato flour to mimic snow. The building will also be clad in a type of sustainable wood (I couldn’t catch the name) that’s harvested in Central Europe, and free of any treatment due to its natural oil content.

The Wadden Sea, stretching across the Netherlands, Germany and Denmark, has an immense influence on birds migrating from the Arctic tundra to the African coast. The fertile grounds of the seashore are rich in scallops, oysters, and worms, providing ideal feeding conditions for the birds before they embark on their non-stop flight.

The Wadden Sea Centre is, therefore, dedicated to communicating the sea’s importance through exhibitions and organised trips. Natural locally harvested materials (e.g. wood, straw) were used to furnish the building, which adopts a thatched roof paying homage to the regional materials of the area. Dorte also mentioned the influence of the sky and light in the region to be ever-changing, with the possibility to use the materials of the building as a type of ‘white painting’ that you could ‘paint’ the light on. Her interpretation was interesting as I could imagine the structure to look very different on a blue-skied sunny day, compared to an orange-tinted sunset.

The Whale sits on the island of Andøya near the small fishing town of Andenes, Norway. Situated 300km above the Arctic Circle, the weather is harsh but not in the same way as Greenland due to the Gulf Stream’s influence. People come here to watch whales who migrate from the Arctic to the Caribbean Sea.

The landscape forms part of the building’s organic wall, thinly cutting into the surface of the rock, which then covers the space in a concrete shell-like roof. The structure is a one-storied exhibition space naturally merging with the rugged landscape to became a part of the topography itself. Rocks from the site were used to clad the roof and create a public plaza upon which visitors could use it as a viewpoint. In contrast to the harsh climate outside, Dorte and her team wanted to ensure that the building provided warmth and shelter for visitors the moment they walked in.

Dorte created a strong impression on me because I saw how passionate she was describing her practice’s projects. The fact that she runs her own as a female architect is still a rarity in the architecture community. The projects discussed are incredibly unique and each looks to serve a specific purpose based on the conditions they’re present in. I appreciated Dorte’s attitude towards sustainable architecture and the impact it has on the surrounding landscape. Her interest in providing carefully curated exhibition spaces to educate and inform people also appealed to me. Perhaps my passion for architecture that serves a clear purpose is the reason why I connected with her talk and left wanting to learn more.