Every day, as I head back after work to brace the commute, I take a moment to admire the growing City skyline from Chancery Lane. The City, London’s first financial district, has witnessed unprecedented skyscraper growth over the past decade. With many exciting projects in the pipeline; some structurally topped out, others approved, and a few iconic structures in place already, we take a look at 5 of the City’s rising and established stars.

Now simply marketed as ‘Twentytwo’, this soon to be 278m (912ft) goliath structure is built on the site of the former Pinnacle skyscraper; a scheme that stagnated due to funding issues in the wake of the 2008 financial crisis. In 2015, with developers AXA Real Estate and Lipton Rogers collaborating alongside PLP Architecture, and WSP acting as the structural engineers, Twentytwo has risen from the ashes and is soon to be the tallest building in the City. Far more restrained in terms of design compared to its more flamboyant neighbours, the developers aim Twentywo to be a champion for the people. Its 62 floors embrace the current trend of communal space for its occupants, with 10% of the structure focused on communal facilities, including 100,000 square feet of coworking spaces, a 7th-floor innovation hub dedicated to entrepreneurialism a gallery, as well as retreat facilities, to name a few. Thus, Twentytwo’s vertiginous height focuses much more on the mental wellbeing of its inhabitants all while establishing its presence in the Square Mile. 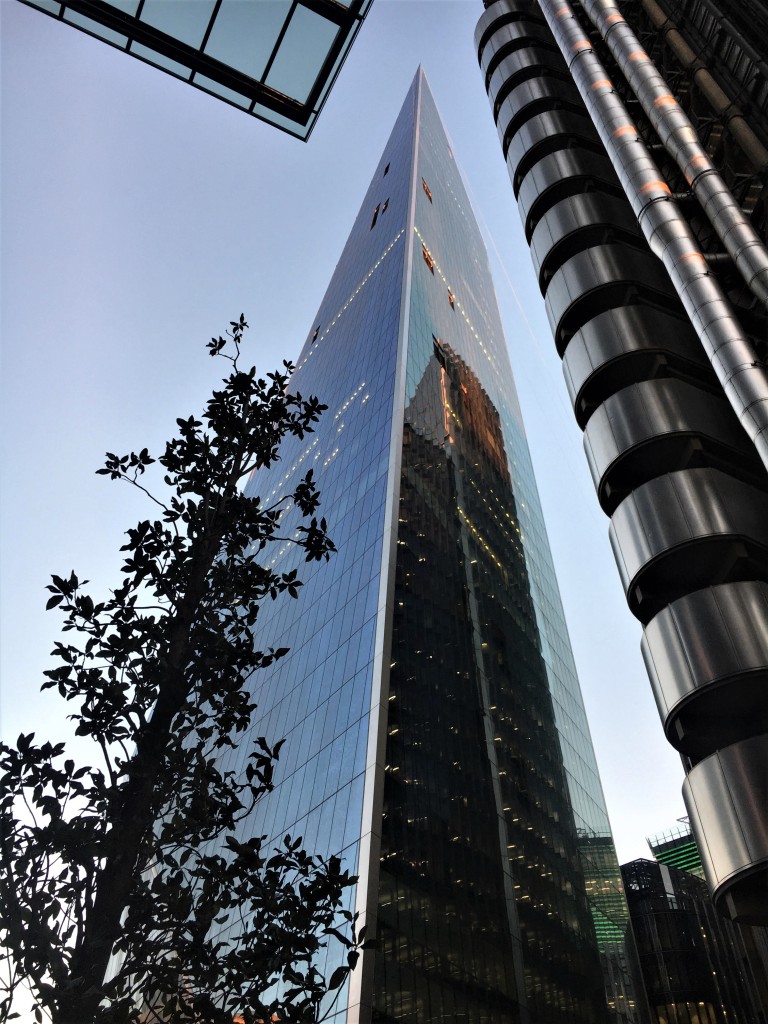 This 190m (623ft) tower, nicknamed the ‘Scalpel’ is the newest completed addition to the City skyline. Designed by Kohn Pedersen Fox Associates and Arup providing engineering services, the new office tower will form the European headquarters of its developer, insurance company W.R. Berkley Developers who are occupying 81,300 sq ft of The Scalpel. Its 42 floors are accentuated in a fine, geometrical form consisting of angular shapes, that – by borrowing a leaf from the nearby ‘Cheesegrater’ – allow for uninterrupted views of the St. Pauls Cathedral. With its structure architecturally topped out, work is being done to fit the last remaining glass panels giving it a sleek finish. It has a similar angular design, like the Shanghai World Financial Centre in China, which comes as no surprise since KPF Associates was the chosen firm for that project. With its strategic location in the heart of the City, it serves as the perfect new office space attracting homegrown and international talent. 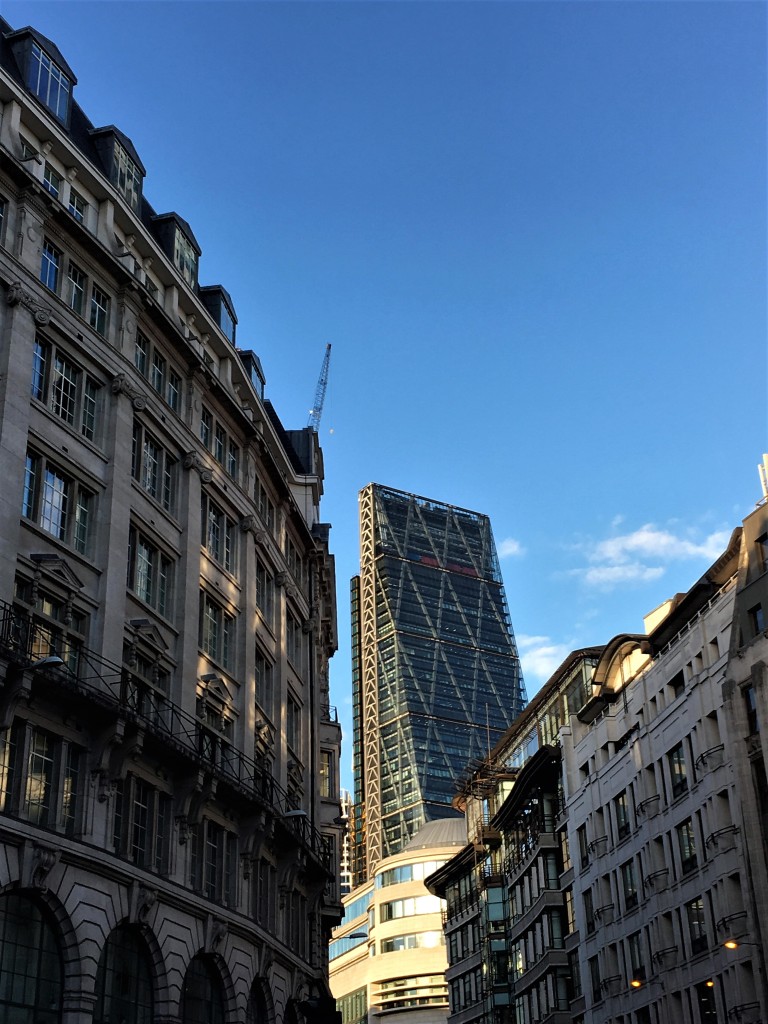 Aptly nicknamed ‘The Cheesegrater’ due to its distinctive wedged shape, the 225m (728ft) Leadenhall Building was developed by architecture firm Rogers Stirk Harbour + Partners, while Arup provided structural engineering services. Completed in 2013, the area surrounding the current Leadenhall Building was redeveloped following the demolition of a previous structure on the site owned by developer British Land. With its tapered height adjusted to a 10° angle, the tower complements its surrounding architecture allowing uninterrupted views of nearby landmarks such as St. Pauls Cathedral. Unusually, for a building its size, it is not supported by a central concrete core; rather, the steel mega-frame on the South side of the tower provides its strength. The North flat side of the tower houses most of the building’s activity, including the mechanical services fashioned with glass and a mustard palette line that zips through the entire structure. However, its unusual design creates limited floorspace the higher up you go. Apart from state-of-the-art offices, the tower’s 48 floors lack communal space for the general public to enjoy, instead mostly offering corporate amenities. There is no denying, however, that this structure is a welcoming addition to our city.

Famed for its sky gardens offering stunning views of London, 20 Fenchurch Street, nicknamed ”The Walkie Talkie”, stands at a modest but impressive 160.1m (525ft) tall.  Completed in 2014, Uruguayan architect Rafael Viñoly designed the building with LandSecurities plc and the Canary Wharf Group being the developers. The now acquired Halcrow Group provided structural engineering services. Its 38 floors incorporate 690,000 sq ft of office space across 35 levels, with the sky-garden occupying the top three. It is noted for its top-heavy design intended to maximise office space for tenants, especially on the upper floors. This is in celebration of the fact that rent prices increase the higher up you go. However, the tower has come with its fair share of criticism. The building’s curved façade, acting as a concave, causes powerful sun rays to bounce off its exterior and concentrate on one spot at street level thus causing some extreme temperatures of 91°C, which has caused a car to melt and a carpet to go off in flames!

Completed in 2011, the Heron Tower (or Salesforce Tower) is currently the tallest building in the City. Situated at 110 Bishopsgate, KPF Associates designed the building whilst Arup providing structural engineering services. Heron International plc were the developers. With its 46 floors incorporating 440,869 sq ft of office space across 36 levels, the tower’s roof height reaches 202m and its 28m mast pushes its total height to 230 metres (755ft). In response to growing workplace demands, the developers adopted a ‘village’ concept for the tower by incorporating 3 storey office spaces centred around atriums designed to maximise tenant collaboration. The stainless-steel bracing expressed on the northern façade of the building highlights this unique model. Rather than being built around a central core, like many other City offices, this tower instead incorporates a side core not only allowing for maximum space to be utilised but also permitting natural light to radiate through.  High-speed double-decker lifts transport you all the way to award-winning restaurants at the top of the tower which is a win-win for both office tenants as well as the general public.

The City’s skyline continues to evolve every day. New proposals have just been approved and ground-breaking is due to commence for those that have secured funding. Among many exciting projects in the pipeline, 1 Undershaft and SOM’s ‘The Diamond’ are the most anticipated. Stay tuned as I track 22 Bishopsgate’s structural topping out over the coming months.